Nuts to You
One girl's daily boredom
Back from Cabo 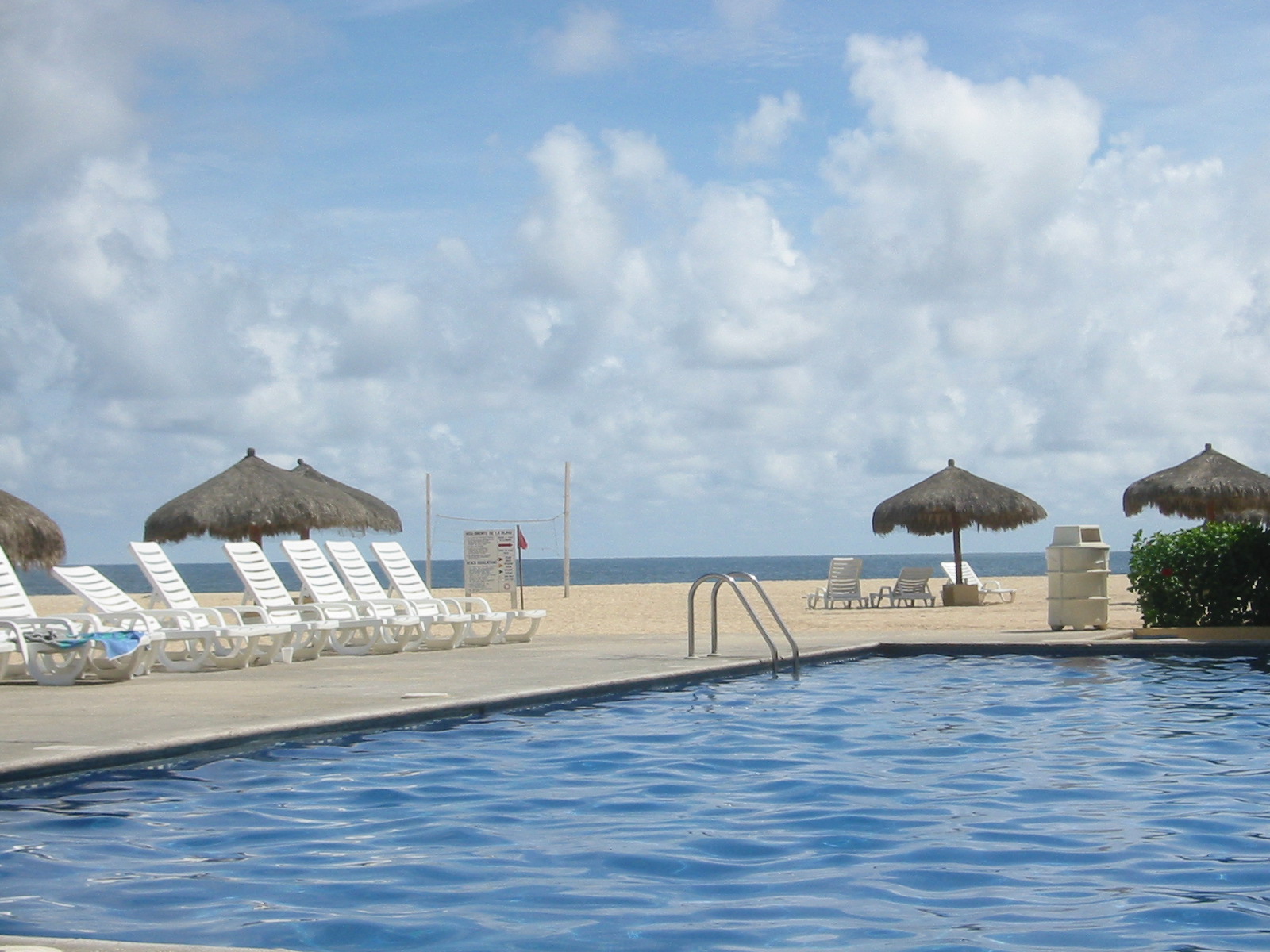 So obviously I am back from Cabo but not back in the Bay Area. I'm still happily in Sumit's apartment not wanting to get in my car and drive the five hours home so I thought I'd dwell on Cabo instead and not the drive towards the dreaded work...ughhh work.

So Cabo was soooo much fun. I would say that the only bad part was that we were in San Jose del Cabo which is like 40 minutes on a hot crowded bus from Cabo San Lucas where all the fun is, or 30 minutes in an air conditioned taxi which costs $40 one way. That was sucky but then again the hotel was worth it because the beach was deserted and the pool was nice and we meet some kick ass guys who were the activities directors. And can I mention they were hot? (Sorry Sumit but you said so yourself. You said they probably got all the girls) Well Maricio and Oliver were awesome guys and were nice enough to take us out down to Cabo one night and show us all the hot spots, and split the cab fare. We went to Cabo Wabo for a drink, which is the place that Sammy Hagar owns and then we went down to El Squid Roe where we all proceeded to get VERY drunk doing tequila shots and drinking too much beer. I'm still happy to report however that I do not have a tequila horror story. I did not take it that far.

We got back late, around 4am and were very drunk, which is fun, however the poor boys had to get up at 9:00 the next morning to take care of a birthday party with about 30 screaming children. Sumit and I didn't manage to get up until 11:00 and we were still hungover so I don't know how the boys did it. We eventually made it out to the pool area and laughed at them as we watched them do activity after activity with the children.

That day we did nothing, too hung over although we did attempt a misguided venture into Cabo San Lucas but the heat and the rocking bus did us in and we ended up just turning around. Stupid hungover us.

We finally did manage to see some sights. We took a boat out to see the famous arch and rock formations in Cabo. We never did manage to go snorkeling. sigh. Next time. The weather was HOT. If we just stood still in the shade it was fine but as soon as you started walking you were a ball of sweat. So we just sat by the pool or on the beach or took a nap and soaked up the atmosphere.

The only thing that REALLY bothered me was when we did manage to make it out to Cabo and do some shopping and walking everyone attacks you asking you to buy something and they're friggin aggressive. I hate that shit. Oh but did I mention I got my hair braided, and I of course sunburned. Damn me. Overall it was mucho fun and to anyone who is really interested I'll tell you more details. And now some pictures:

yay braidy head! damn that place looks gorgeous. i'm so glad yall had fun. i hope you kept the braids so i can see em.

I kept the top braids the rest are out as they were falling out and driving me crazy. Still pretty though

do you still have them so i can see them though? that is the question.

did you have sex in the water at lover's beach? i saw people having sex in the water. but that was just at an ordinary beach. at the mauna kea resort. where they won't let you sit on the fucking lounge chairs unless you are a hotel resident. fuckers. i fucked shit up with an inflated pink hippo in revenge. and then peed in their ocean. no but really.

i mss beaches! ahhhh!!! i go to look at my pictures now and reminisce.

And no we did not have sex on lover's beach. Did I mention that divorce beach was on the other side. Pretty entertaining.

And cabo wabo is a great name. Trevor told me about it before I left. However before we went in Moricio warned that it smelled like sweat in there and man was he right. BO Central!

We are heading that way for our honeymoon. Any intereting places you feel are worth mentioning?

Going to see the arch was an experience and you should definately hit the bar scene. If you like that sort of thing and even if you don't because it's a great experience. Honestly we didn't do much more but sit by the pool, but I know that there are many land/water tours and snorkeling that you can participate in. I would suggest asking your conceirge when you arrive.

congradulations on your wedding!