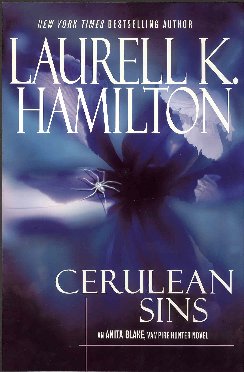 First two chapters of the new Anita book due out in April are here.

Am I desperate for at least one of my series to come out with a new book? Oh yes. Yes I am.

what the fuck. that cover is not part of a naked body part. i want my naked body bits!

I think they ran out of naked body parts. But look now they're using insects.

well there are only so many naked parts they can use.

besides, the spider is naked. and totally hot.

dood, nice gif. i am so impressed. did you imbed that yourself? you are wicked smart, girl.

Well michele found it. I've been fooling around with it the last half hour trying to find the best place for it

I have a naked body part on my Cerulean Sins book.

REALLY? you mean something besides the ankle? because that's just not risque enough for me.