Nuts to You
One girl's daily boredom
Mmmm Food

So Kristen has said that Caddyshack has the best date scene ever. Well I believe her so you should believe me when I say that Big Night has the best dinner/food scene ever. It's everything I've ever felt about food rolled into about 10 minute of film. It reminded me of the dinners with the French family or the parties my parents threw where there were at least 3 chefs in the kitchen when I was younger. In the movie dish after dish keeps coming out of the kitchen and everyone is speechless because it's so damn good. And once they get their powers of speech back everyone is having a great time dancing, singing and playing games. This movie shows to me how food creates an atmosphere and brings people together. The rest of the movie is so-so, but the dinner scene is fun and makes my hands itch to get in the kitchen and cook. 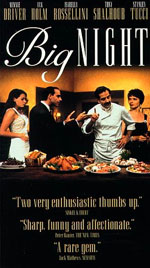 I thought Big Night was sharp, funny, and affectionate.

Is it based on a play? I seem to remember reading a play with a plot very similar to Big Night's.....

I liked most of it, but I felt parts dragged, but that's just me.

I don't know if it was based on a play though.

Bah....dragged nothing. I thought that it was a rare gem.

As far as I know, Stanley Tucci wrote it with his cousin. Original screenplay.

Thank you Sean, you infinte source of random information you.

i have nothing to say about this movie, but can i just say noyce site. really like the recs and pics.

i think jacob's a rare gem. rare like a retard at a school for the stupid.

(translation: i thought this movie drug in parts too. which is why i have blocked it from my memory other than the whole guy from wings connection thing.)

Hmmmm....I guess I'm the only person here who hasn't seen this movie. I was basing all of my comments on the quotes I saw on the picture, because those things are NEVER wrong.

you fucker. i thought you'd actually seen it. i wear the giovanni crown.

but is there enough giovanni crown to go around? oh yes. yes i think there is. cause he is a VERY BIG GIOVANNI.

What is this giovanni thing that you guys keep throwing around? I've been missing the reference this entire time....

By the way...are you guys still coming over to see my new apt. today? Because you get off work 1 minute ago, but michele answers no cell phone. Hrrrrrmmm....

You guys (or I) have the worst timing EVER. I had my cell phone right next to me, ready to receive your call. Then I went to the bathroom for 3 minutes. You called while I was in the bathroom. Oops!

giovanni = giovanni ribisi (phonetic spelling) who played the retard in The Other Sister, and also in all of his other movies (boiler room, phobe's bro on friends, etc).