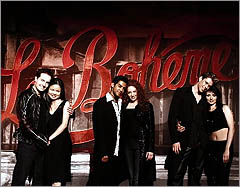 It seems I am in a theatre funk this week. My sister had told me about this months ago but I just found out the dates. Baz Lurmann is directing La Boheme and its world permiere (actually that's a lie, it's the American premiere as it was produced in Sydney already) is in San Francisco October 1st - November 10th at the Curran Theatre. After this it will move to New York to be performed on Broadway.

So I will be off to see this too on top of the ballet! (see Sept 11) And my Mom, cause she's curious. She likes Baz. Anyone else want to come? Come on it will be fun. (she says as if trying to lure a dog into a bath it KNOWS won't be fun) There'll be singing, as in the opera kind. In Italian no less. With subtitles. (Not that they're all that exciting and how they are incorporated I do not know, but don't you want to find out?) So come one! Come all! Come oogle at the pretty people with me. You know you want to.

This is truely a "must see". Unfortunatley, I will be unable to attend as I have no interest in musicals. However, if instead of singing and acting out scenes they were torturing each other with sticks and hot pokers, I'd surly work it onto my schedule.

is that aaron aaron? did he actually make a comment?

did you find out how much the tickets are yet? suspicious face.

boheme! boheme! i go to see the boheme!