Nuts to You
One girl's daily boredom
Wedding Pictures 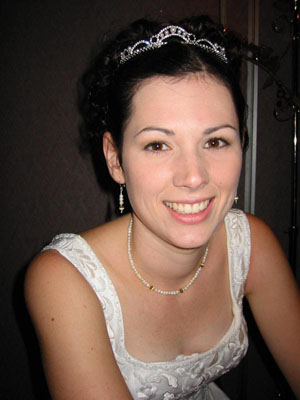 These are just some of the pictures Jen took with her digital camera. And can I mention that for some strange reason Kathleen calls Larry, "Pooh". Why exactly I can't remember, but amusing none the less. I officially declare them more sappy than anyone else I know, including me and Sumit. ANYWAYS:

The Groom aka Pooh

ah so pretty! she looks SO MUCH like your mom! but probably that just means she looks a lot like her parent who is related to your mom.

No the family has always said she looks like mom. Not that Margret doesn't bear a resemblence to mom. But she looks more like mom

wow. she is so beautiful. and photogenic.

I know they all are. Damn them

nuts to me, indeed. but where are my updates my little ducky mcduckerton?

I haven't had anything interesting to write about. I'm working on it.

you could write about sexualized pottery too....

quit grossing me out.

although strangely I now want to go play with clay. It was fun! We should go monday night to practice. Just no touching me.