Nuts to You
One girl's daily boredom
Mr. Ribbon

Mr. Ribbon is gone. Today was hard. I spent some time with him, but he wasn't himself. Yesterday I came in and he stuck out his tongue which is his standard sign of hapiness. He fell asleep on my hand a couple of times and he was dreaming, with his little paws twitching like he was chasing a mouse down.

Yesterday was the hardest realizing he wasn't going to get better. Today was just me trying to avoid thinking until it was time. He was well taken care of. Everyone at the vet office knows him. They took extra special care of him and me. Nicci stayed with me and we both cried over him. I held him and he went quickly. It was like he was sleeping. It was so hard to think he was gone.

I went through a lot of my pictures today. I was paranoid that I didn't have enough of him and that I would forget what he looked like or how silly he could be. I found one picture where I must be 14 or 15, so it's more than 10 years ago. I'm on the couch with my feet up on the coffee table and Ribbon is on my chest sleeping, completly oblivious to the rest of the world. He's so happy. This whole situation caused me to feel like I hadn't done enough or that I didn't pay enough attention to him. That I was gone too much or that I ignored him, but I found that picture and realized that was just one of a million times when we were like that. That one time just got caught on film.

When we first move to SB, he and I used to take a nap together everyday after I got home from work. He would crawl under the covers with me and lean up against my chest and I would throw an arm over him and we would sleep.

He was the best little cat up to the end and I will miss him more than I can say. He was my first real pet which makes losing him even harder than I though possible. I remember getting him and all I could think was that he was real. And now, now he's really gone. 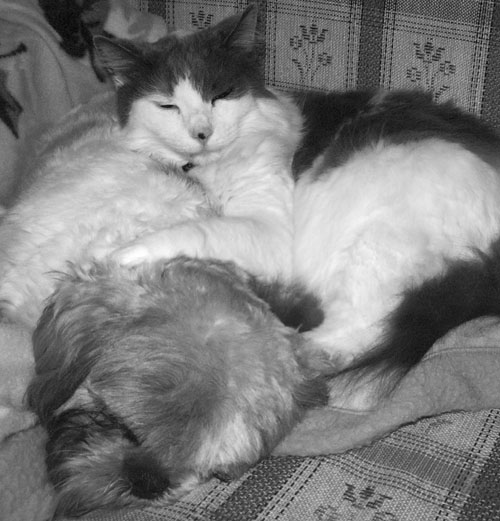 I don't really know how to start this entry. I've had some extra stresses this past month. Nothing horrible, until yesterday.

Ribbon is sick. He had what looked like a cold about 3 weeks ago. I went to the vet and it ended up that he had an infected tooth. Once they went in and looked around however they noticed more infected teeth. Instead of one tooth being removed they had to take out eight.

I was horrified. I felt like the worst owner ever and what's worse is that he lost his fangs. Everyone here called him vampire kitty because of his long canine teeth. He has one on the bottom left so I've taken to calling him Bucky. He recovered wonderfully. He was eating, playing and back to his normal self.

I decided to go on a last minute trip up to Sacramento to see my roommate Krista before she moved to Denver. When I got back I noticed that Ribbon had not eaten all his food which is very unusal. Deanna told me that he hand't eaten a lot in the mornings but ate more in the evenings. Over the rest of the week this slowly deterorated and soon he wasn't eating anything and his arthritis started to kick in and he was barely moving. He was supposed to go to the vet in four days for a check up on his teeth but I took him in the next day.

Nicci, his vet, thought that he had an infection from food being stuck in the sockets where his teeth had be removed and reccommended trying antibiotics and if I didn't notice an improvment then we would schedule him to be put back under and remove the food and close up the gums. He didn't improve. He got worse. He ate a little but was not himself and was taking to hiding under the bed. I called Nicci everyday and this last Friday we scheduled him to come in on Monday. But yesterday I woke at 6am to find him trying to throw up. He had nothing to throw up. I couldn't stand the thought of two days watching Ribbon not eating, not being able to move and throwing up nothing.

I called Nicci. She had a cancellation and I brought him in. I was a wreck. And poor Nicci was emotionally involved because she knows me and Ribbon. She decided to do tests to see if anything else was wrong and make sure that he was okay to undergo the sugery on Monday.

I got a call a couple of hours later and it was not good news. He's not doing well. His kidneys are in renal failure. This was brought on suddenly by the pain medication that he was given after his oral surgery. Apparently very rarely this medication can cause this situation.

So he's really sick. Nicci gave him a 50/50 chance. We're going to know more on Monday. Right now he's at CARE an emergency pet facility so that he can stay on fluids 24/7. They're hoping that they have caught the situation in time and that they can flush out his system and bring down the toxic levels in his system. I'm picking him up tomorrow and taking him back to my vet and they're going to do some more tests. But basically come Monday I may lose Ribbon. Happy Birthday to me.

What's even stupider is that I had tickets to Dave Matthews for the last 6 months for last night. Everyone kept telling me to go. Even Nicci. She took him to CARE for me after she finished work because she wanted me to try and enjoy my birthday. So I went. The concert was actually probably the best one of his I've been to, but I feel like the worst owner on the planet and it was hard to relax. Plus when I finally was relaxing, the person who took me had told people he would be back in SB in time to go out downtown. So the entire time I felt like being with me at the concert was the last place he wanted to be. It made for an evening where I was feeling better only to be made to feel worse by someone who is supposed to be a friend. Maybe I expect too much of people. Maybe I'm just as selfish. Who knows.

I know that to most people this whole siuation probably seems like a minor problem and that I'm upset over nothing. He's just a cat, but I've had him since I was nine. He's been a constant in my life for a very long time. When other thing have gone bad I've had him. The idea of him not being there anymore is really hard for me to contemplate.

On top of Ribbon being sick the last couple of weeks, life in general this past month has been a little stressful because a coworker is going through some problems with her husband, mainly he's a jackass, but then again that is none of my business. He called her at work about three weeks ago and said he wanted a divorce and told her to get out of the house and to take their five year old daughter. She's taking it pretty well. She knew the marriage was on its way out, but I think she had still been holding out hope. She's been staying at my house.

Now why is this upsetting to me? I mean it's not like I'm getting a divorce or have a verbally abusive husband. It has stirred up old memories for me. This was my family 7 years ago. My mom had two older kids to help her, her own mother to help her financially, and time to get things together before we moved out. My coworker has had none of these. She's been kicked out with no where to go, no savings, and no family in town to help her.

She's become a good friend and she's been stressed out, but having her at my house 24/7 has also been stressful. Just because having a guest at your house makes it hard to relax. She's finally figured out what she's doing. She's going to be moving back to Washington. Her aunt is going away on a trip for 8 months and offered her the house during that time. She has family support up there and job opportunities as well. Plus it's cheaper to live up there. So things with her are working out. I'm glad that things are settling down for her.

But overall it hasn't been the greatest month. I'm trying to keep positive about Ribbon. If this treatment works Nicci says that he will be fine, but if it doesn't.....well. I guess I will see on Monday. I just wish I could do more. I feel so helpless. I'm going to go visit him this afternoon at the pet hospital. Let him see a familiar face.

I think I'll save being happy about my birthday for when I'm in New Zealand with Michele. I think I'm going to start calling random happy days my birthday because my actual birthday never works out.