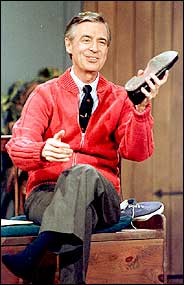 Now I know Jade wrote about this already, but I didn't actually believe her till I found it on the NY Times. Mr. Rogers is dead. Now I know most people won't care as they found him scary or boring, I know my Mom did, but I LOVED him. As a child I could have watched him forever, and I'm sure I did. It's sad to think he will no longer be my neighbor. sigh.

Good bye Mr. Rogers. We'll always have those neighborhood memories. You kept a 5 year old TV watching Nuala happily occupied and damn if those puppets and their adventures weren't the coolest things ever.

you realize rogers doesn't have a d in it though, right? for someone who loves him you should learn to spell his name. see unlike say sesame street which taught children how to spell, rogers just taught them how to pee thier pants in fear. which is why rogers has no d and cardigan does, see?

oh my god. this is so sad. i loved that man with king friday and the platypus gang.

i think it was a sad day for everyone, that day we realized that mr. rogers was controlling trolley with a knob and a button while he was "talking" to him. in that one crushing moment we realized that trolley was just so many gears and bells, a simple toy being operated by a simple man who was having conversations with himself. oh, the lost innocence of youth.

i once heard an urban legend that the reason mr. rogers always wore long sleeves was to cover up his airforce tattoos. me, i think he was hiding track marks. but that's just me.

you all (all two of you) need to go somewhere else with your anti-rogers sentiments. the man was a saint. a cardiganned saint. now either rend your hair and clothing and get to wailing or else leave me and nuala in peace to ululate.

He actually did a lot of great stuff for kids. I'm with Kristen he should be given sainthood, except he was Protestant. Oh well.

all right then, she says suspiciously. but why aren't you wearing the rogers t-shirt? BOY, YOU HAD BEST PUT ON THAT SHIRT IF YOU KNOW WHAT'S GOOD FOR YOU!

mr rodgers..the man had a vision...and he carried it out to the fullest. we must admire that. To place aside male ego and pride in order to be a male role model to 100 of thousands of children..that was awesome.

I pray that more tv would reflect the values and the decorum i learned through watching his show.